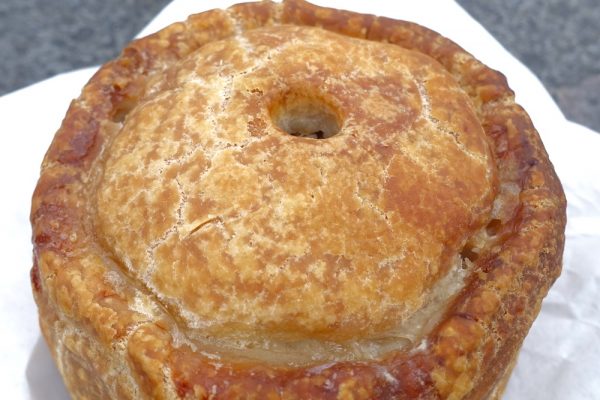 Unlike American pies, which pretty much come in one shape (think classic apple pie in a tin plate), British pies come in all sorts of shapes and sizes. It seems that everything enclosed (or half enclosed) in a pastry shell is called a pie.

What is in a pie

Pie, in general, is a baked dish with a crust encasing a filling. Pies can be sweet (apple pie) or savory (pork pie, steak pie, etc.) They can be baked in a dish or free standing on their own. Free standing pies look like a stack of hockey pucks!

So depends on what you are in the mood for, there is a pie for you.

The British have a long history of baking. But they did not invent the first pie; the Egyptians did. The Romans also made pies and likely to be the ones that brought them to the British Isle.

Pies appear in recorded British history as early as the 12th century. At that time, the crust was referred to as “coffyn”. The coffyn was merely a vessel for what resides inside. But over time, as the techniques and flavor profiles improve, the outer layer become more edible and palatable.

Various regions of the UK have developed different pie specialties. It all depends on the local agricultural scene . For example, in Cornwall, housewives made star-gazy pies, at a time when pilchards (adult sardines) were plentiful. In Scotland, mutton is the main filler in its Scotch pies. Overall, steak & kidney and steak & ale pies are both very popular everywhere in the UK.

Every year, pie makers compete in British Pie Awards during British Pie Week. There are 20+ categories in this annual pie-off event. This stuff is serious!

One thing that takes this uninitiated American eater some time to get use to is that many of these pies are supposed to be eaten cold. Cold, as in, room temperature or right out of the fridge, never ever hot out of the oven. About half of the pie categories at the Pie Awards are judged and supposedly eaten cold. How quirky!

But trust history and the power of food evolution! This cold meat encased in rich pastry is delicious.

Here is a list of pies that I have compiled that I aim to try. Some are classic pairing of ingredients, others are local specialities.

The name is a bit of a misnomer today as the pie no longer has minced meat in it. Mince pie started out life as a way to use up precious meat about to go rancid. To disguise the strong flavor and smell, old recipes called for lots and lots of spices. Nowadays, it remains a spiced pie (no meat) popular during the Christmas season.

This geographically protected pie (EU PGI ) is so popular that it is mass produced and available in supermarkets. You can read about the history and my experience with this savory treat here.

As a beer brewing/drinking country, the UK has a long history of beer making. So it’s not totally surprising to use this dark liquid to tenderize the meat and infuse the pies with flavors.

This is another classic combo. Sometimes called Kate and Sydney pie, it is closely related to its pudding version, which first appeared in Mrs. Beeton’s recipe collection in 1861.

Bramley apples are native to the British Isle. Similar to Granny Smith apples for American apple pie, they are quite sour.

This is another geographically protected (PGI) pie progeny. All Cornish pasties are made in Cornwall in accordance with strict guidelines. They, however, do not need to be baked in Cornwall. So you can enjoy fresh Cornish pasties in London or elsewhere without having to get to Cornwall.

In the UK, shepherd’s pie usually refers to a lamb pie, while a cottage pie is made with beef. These are open-face pies, topped with mashed potatoes.

Where to experience an authentic British pies

Pies are literally everywhere in the UK (and in its former colonies too!). You can find them in the supermarket or takeout/take away shops or in fine dining restaurants. You will also encounter them in farmers markets all around town. These are often ready to eat for the grab-and-go crowd. 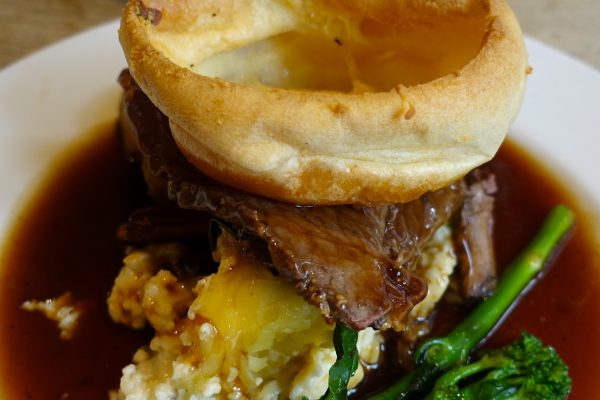 If you like meat, Sunday roast is a must while you are in the UK. Centuries of perfecting roasted meats and accompanying sides mean that this is one delicious meal to look forward to every week.

What is Sunday Roast?

Sunday roast is a meal in the UK, served, well, on Sundays. Originally, it’s the meal served after church on Sunday. What better way to break your fast after church than a sumptuous meaty meal!

Some calls it Sunday lunch (if you have it for lunch) or Sunday dinner (dinner used to be the midday meal, the biggest meal of the day), or simply roast lunch/dinner. Whatever it is called, the basic composition is the same.

What’s in a Sunday Lunch?

The full roster of any roast varies depends on who is cooking. But it usually includes a meat (beef, pork, chicken, even lamb), some potatoes and other root vegetables, roasted or blanched, and buttery Yorkshire pudding. All play nicely in a pool of brown gravy.

Meat is an essential part of this spread. The most traditional choice is beef. Before the invention of kitchen stoves and ovens, roasts were originally cooked on a spit in front of the open fire. To prevent precious fat being lost during the cooking process, excess fat was cut off first. The cook then would place a pan underneath the roast to catch fat drippings and to cook Yorkshire pudding. Just imagine, all the dishes of this meal arranged around the open hearth. The aroma must have filled people’s homes, as the anticipation of the meal built.

In 1822, William Kitchener suggested a horseradish garnish to go with his sirloin roast beef. Nowadays, each meat is accompanied by its own condiment: horseradish for beef, apple sauce for pork, mint sauce for lamb. I am not sure if there is a sauce that always goes with chicken.

Like so many traditions, the origin of how/why something comes about is lost. Roast, especially roast beef, is an old English dish dating back more than 600 years. In the late 1400s, Henry VII’s royal guards would roast beef before going to church. This could be the reason that these royal bodyguards, Yeoman Warders, acquired the nickname “beefeaters.”

This idea of slow cooking a roast while attending church quickly caught on. By the early 18th century, roast beef had become a source of pride, and even identity.

When mighty Roast Beef was the Englishman’s food,
It ennobled our veins and enriched our blood.
Our soldiers were brave and our courtiers were good
Oh! the Roast Beef of old England,
And old English Roast Beef!

But since we have learnt from all-vapouring France
To eat their ragouts as well as to dance,
We’re fed up with nothing but vain complaisance
Oh! the Roast Beef of Old England,
And old English Roast Beef!

In a 1748 painting, the artist,William Hogarth, brought the ballad to life in his painting “The Gate of Calais”.

The painting depicts a scene at the Gate of Calais, showing a cook carrying a large piece of beef, while a French man longingly eyes the beef over the bowl of soup in his hand.

With this meat being such a big part of popular cultural identity, it is no wonder that as early as the 1800s, the French nicknamed its neighbors across the channel, “les Rosebifs.”

Before ovens became ubiquitous, every community had a local bakery. Families would drop off their roasts at the bakery on their way to church service as they took advantage of the fact that bakers did not bake bread on Sundays.

If there is any left over from Sunday roast, they are used for meaty sandwiches for the work week or bubble & squeak for breakfast.

Is Sunday roast worth trying?

There are two parts to my answer to this question.

The food- well, if you are not a vegetarian, I think it’s worth trying the food at least once. When the meat is roasted tender and the Yorkshire is done right, it is a sublime combination. But if you are not into meat or heavy meals, then it’s ok to pass.

The experience- To me, the whole Sunday roast represents more than the food, but rather the experience of gathering with your loved ones on Sunday. I, myself, am not a big meat eater. But I like the idea of family and friends getting together to go down to the local pub on Sundays to catch up on life.

Where to experience it?

If you happen to travel in England on a Sunday, definitely find yourself a roast and enjoy this weekly tradition. It shouldn’t be hard to find. Chances are, most pubs in town will offer some kind of roast on Sunday.

If you are in it for the food, I suggest checking out this guy’s hilarious blog. Every Sunday, he goes around London checking out different Sunday roasts, and then rate the meal. Apparently, a lot can go wrong with a roast dinner.

If you are in for the experience, grab a few friends, and check yourselves into a pub.