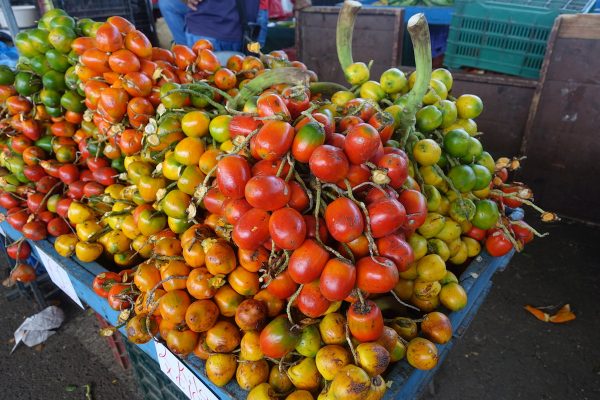 With it’s tropical climate and fertile soil, it is no wonder that Costa Rica’s farmers markets are bursting with exotic (at least to us) produce. Here are seven exotic tropical fruits to eat when in Costa Rica.

This is definitely my favorite tropical fruit to eat in Costa Rica. Before coming to Costa Rica, I’ve had regular passion fruits (maracuyás). Granadillas are a related cousin of maracuyá.

Unlike maracuyá, which seems to come in all shapes and sizes, granadillas are pretty uniform in size and shape. The outer shell starts out green and matures into yellow/orange in color with some white specs. Both granadillas and maracuyás have black seeds, about 1/4 inch in size, each surrounded by a juicy sac. In maracuyás, this fleshy pulp is yellow/orange. In contrast, the pulp in granadillas is white/translucent. Appearance aside, granadilla seeds are sweet, while maracuyá seeds tend to be pretty sour.

To eat granadillas, simply break open the shell and scoop out and eat the seeds. The seeds are in a membranous pouch. I usually don’t each this pouch membrane (it’s a little pithy), and just scoop out the seeds.

Having said that, definitely pick your own instead of getting a pre-bagged ones if you can. Bounce the granadillas in your hand to get a sense of the weight. Some will seem hollow and light. Go for the heftier ones. These have more juice.

Pejibaye is definitely an unknown tropical fruit for me! Never heard of it, let alone tasted it. We first encountered them in the Desamparados farmers market- branches tied together in bundles with bright orange/yellow fruits hanging. They are quite pretty, and remind me of ripe persimmons.

These little guys cannot be eaten raw. They must be cooked first. The process involves hours of boiling to soften the fruit. At the market, they are available both raw and cooked. In fact, not too far from where we first spotted them, there was a woman cooking and selling these.

In Costa Rica, locals eat them with some lime juice or a smear of mayo. I think they are quite delicious plain with no condiment. They taste a bit like a nutty sweet potato.

Wax apples from Taiwan have always been one of my favorite tropical fruits to eat EVER. So I was over the moon to see these closely related cousins in the market in San Jose. They taste very similar, though the textures are quite different. These seem to be less crunchy than the Asian ones I’ve had. They are also much longer than the ones from Taiwan.

The Spanish name, manzana de agua, literally means apple from water. They are quite refreshing to bite into, especially on a hot day. If you get ones that are a bit more ripe, the texture turns into something akin to a bartlett pear.

This is one interesting looking tropical fruit. Again, the colors initially led us to think that it was another cousin of the persimmon (how weird that persimmons are our point of reference), but with a weird appendage attached to the bottom of the fruit. Well, that weird appendage turns out to be cashew. And marañón is the cashew fruit, or cashew apple.

Yup, THAT cashew you get in your Planters’ nut mix.

I bet you didn’t know that is where it comes from. Me either.

The cashew nut cannot be eaten raw and needs to be processed to become the cashew you and I know. However, the fleshy fruit, marañón, can be consumed as is. The fruit can ranges from yellow to bright orange. They can be small oval in shape or long.

Typically available in the dry months in Costa Rica (January- April), it tastes pretty tangy and is used by locals to flavor drinks.

If granadilla is my #1 find, jocotes are solidly in second place as far as my top tropical fruit to eat in Costa Rica. Jocotes are also known as purple mombin, red mombin, hog plum. They are rather small, usually about the size of a human thumb. Each jocote contains a large stone in the middle. I wish someone would cultivate these and breed with one a smaller stone and more flesh.

When they are green and not quite ripe, they are quite firm and don’t have much of a taste. But when they turn soft, the pulp becomes quite mushy and sweet. These little guys are absolutely delicious when ripe.

Locals seem to eat them when they are firmer and still green. But if you have the patience (and the sweet tooth), I’d suggest letting them ripen until they are soft and goo-y.

At the market, they usually run about 1000-1500 colones per kilo. Some vendors collect and set aside ripe ones in plastic bags. I suspect that it’s because the ripe ones are delicate and easily crushed. Case in point- I bought one of such said bags and put it in my grocery tote with a few leafy items. By the time we got home, half of them were mushed.

Another tropical fruit to eat in Costa Rica is the banana. Although they aren’t exactly exotic since they are so ubiquitous, I think they are worth trying while in Costa Rica because there are so many different kinds of bananas available. Unlike the factory-standard Cavendish bananas we get in the supermarkets, you can actually get non-Cavendish bananas that taste better than Cavendish.

Our favorites, by far, are these little baby bananas. I think they are “apple bananas.” They are about half the size of regular bananas. They don’t have much of a curve to them… really kind of stubby looking. But they seem to last for quite a long time, and doesn’t get nauseatingly sweet even when ripe. But they are packed with apple-y flavors, a little sweet and a little tangy. Hands down, better tasting than supermarket Cavendish bananas.

Another tropical fruit to eat in Costa Rica is the mangosteen. Originating from southeast Asia, it is now widely grown in Costa Rica. The season for these purple balls is quite short, so if you see them grab them.

I was able to buy them at the farmers market for about 1500 colones per kilogram. When you buy, select the ones that are uniform in color (deep purple). The outer shell is not edible. Once you cut it open, you will find this snow-white inner flesh that are sectioned (like citrus wedges). I usually use a tea spoon to scoop out the flesh without making a mess.

I find these even more delicious when chilled!