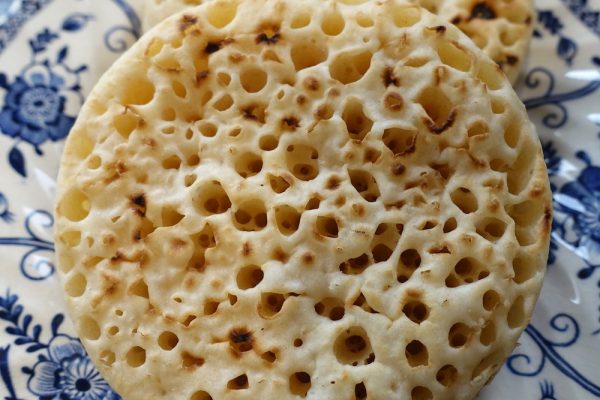 If Thomas’ English muffins and pancakes had offsprings, those lovely bakery babies would be crumpets. This Anglo breakfast feature is in every supermarket in the UK and Australia but curiously missing in the States.

Crumpets are yet another unknown to most Americans. They are kind of a cross between doughy pancakes and hole-y English muffins. As they are cooked in rings only on one side, the bottom side becomes golden in color, like pancakes. The other side stays pretty white though and contains lots of holes, like English muffins.

But unlike English muffins where holes are only revealed after splitting the muffins in half, crumpet holes are clearly visible without cutting anything. These columns of holes are much longer and smaller than the rounder, shallower holes of English muffins.

Crumpets probably came from Wales based on the etymology. Undoubtedly related to other griddle cakes, housewives made them on the hot griddle as it was not very common for typical households in the region to have an oven at home. So all sorts of starchy sustenance were cooked on the griddle.

The earliest recorded reference was in 1382 in John Wycliffe’s translation of the Old Testament from Latin. However, “Crompid cake” had little resemblance to modern day crumpet besides the name. The main connection seemed to be that both were cooked on the griddle.

By the time Elizabeth Raffald included a recipe for crumpets in her book, The Experienced English Housekeeper, in the 18th century, these crumpets were beginning to look like the modern version we see today. The recipe called for the use of eggs and yeast. But still, rings were not used at this time to help the cake rise.

Today’s crumpets are soft and doughy. But they have not always been so. At first it was flat and hard, mainly made with buckwheat flour (cheaper than wheat flour as buckwheat is easier to grow in cool, damp climate) and sometimes without a leavening agent. It wasn’t until the Victorian era that baking soda was discovered and became widely used in the batter.

In certain parts of the UK, crumpets are referred to as pikelets. This is utterly confusing becuase in yet another part of the UK , pikelets are their own thing, made from the same batter as crumpets, but without the use of rings to help them rise. So those pikelets are more free form and more spread out (flatter). Some people call pikelets “poorman’s crumpets” because it’s for people who can’t afford that metal ring!

Crumpets are one of the easiest breakfast foods while traveling. As long as you have access to a toaster or an oven, you can have a great breakfast experience without going to a restaurant. They are readily available in grocery stores in the UK and Australia.

Whether branded or generic, these are not expensive to begin with. But stores often heavily discount them as they don’t keep fresh for that long. They become a little goo-y after being wrapped up in plastic packaging for a few days.

Oh, they are still very good, but you definitely need to toast them, preferably until crunchy on the outside to get the best out of these.

Check out the Crumpet Awards. The available brands of grocery story crumpets seem comprehensive. Not sure how current it is though.

My own crumpet story

My first experience with crumpets came during our “island hopping” trip in the Outer Hebrides. Many of the grocery stores in this part of the world are understandably limited in their offering, since the local population is quite small throughout most of the year. But they almost always have crumpets in stock.

The first few times I had it, we were on the go, a.k.a catching the ferry or hopping on the once-a-day bus. So no toasting or spreading of any sort. I did not like them. I thought they were bland and tasted a bit yeasty.

On the other hand, my dear husband thought it was the perfect utilitarian food (my utilitarian food would be pork pies)- moist enough to eat without having to wash it down with a beverage, which then would require a bathroom break in the near future. It was also cheap and filling.

It wasn’t until years later when we were in a Sydney Airbnb that I encountered for the first time warm crumpets. And THAT changed everything.

Personally, I like them super toasted- crunchy but not burned. I am not a butter person, so I top them with honey, syrup or jam. The holes really help store the goodies and deliver the flavors.